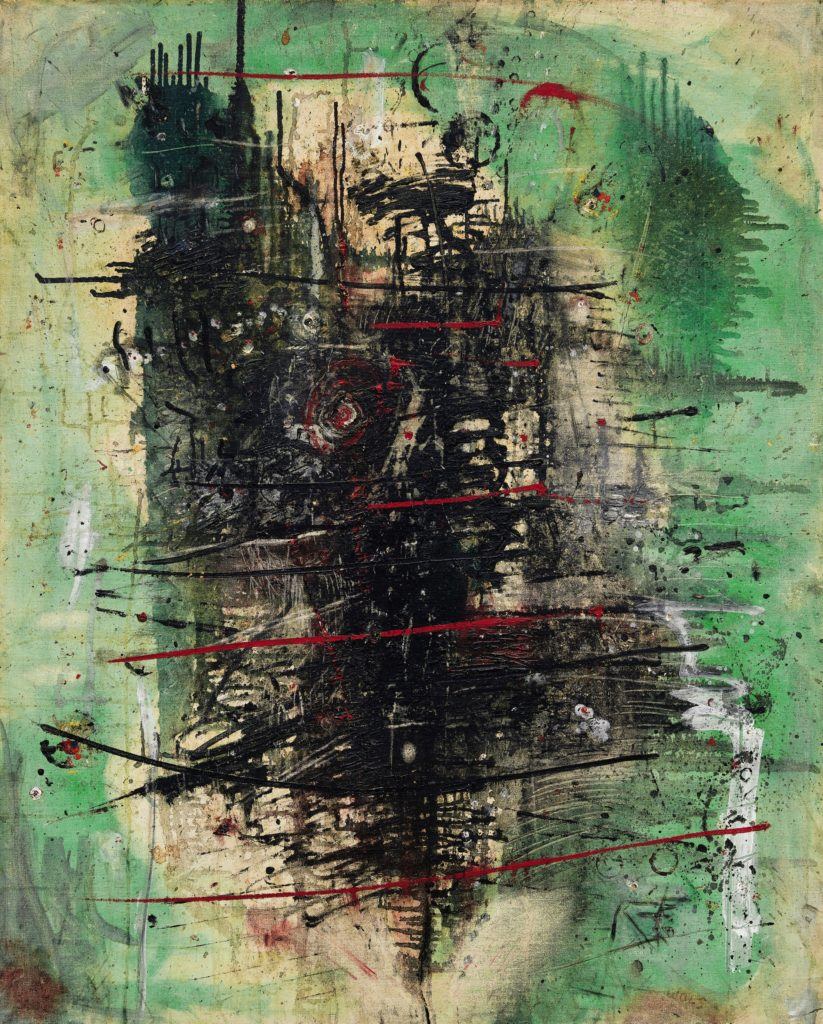 Which of these paintings sold for $5.71 million?

On June 27, 2019, I posted this to my Facebook page. Painting still remains a mystery to me.
One of these paintings just sold for £4.5 million ($5.71 million). The other was just painted a few hours ago as part of my personal therapy and playtime. I don’t think when I paint. I just paint for hours on end and get very, very dirty. I love it…and I do it solely for my own enjoyment.
I am feeling a bit weird. Either I am in sync some strange way or I just unconsciously plagiarized, albeit rather poorly, an artist I have never heard about.
Yesterday and today I painted eight paintings after purchasing a lot of frames and old paintings from a local business closing down. I typically paint over whatever I buy since it is the cheapest way for me to play with paint. I made a huge mess and just finished cleaning up at 11:35 p.m., exhausted. I sat down with a drink and caught up with the news. The New York Times had an article about Sotheby’s Postwar London sale that had occurred on June 26, 2019. Scrolling down, I found a painting that was uncannily like one that was drying in my kitchen.
“The big surprise of the evening was a rare 1946 abstract on canvas by the influential German artist Otto Wols, the likes of which had not been on the market for a while—hence the hefty £400,000 to £600,000 estimate. In fact, this painting, Green Stripe Black Red, had come to auction back in 1984, when it sold for what was then a record of £132,000. Tonight’s work was pursued by Berlin dealer Heinrich zu Hohenlohe and a tenacious Japanese bidder before selling to a German phone bidder for £4.5 million ($5.71 million), shattering the artist’s 11-year-old auction record of £2.6 million.” – New York Times
I looked him up:
Wols was a German artist best known for his involvement in the Tachisme movement of abstract painters in France. Wols’ paintings featured drips and scratches in defiance of the aesthetics and art theory of his day. His work is seen as a predecessor to the later Lyrical Abstraction movement. Born Alfred Otto Wolfgang Schulze on May 27, 1913, in Berlin, Germany, he grew up in a wealthy family who were patrons of the arts. He eventually settled in Paris after traveling abroad, studying photography and painting with various teachers. In Paris, he befriended Fernand Léger and Max Ernst and began exhibiting his work for the first time. Though largely unrecognized during his lifetime, Wols’ work has found appreciation with contemporary audiences and is today found in the collections of the Art Institute of Chicago, the Tate Gallery in London, The Museum of Modern Art in New York, and the Hammer Museum in Los Angeles, among others. Otto Wols died from food poisoning on September 1, 1951, in Paris, France at the age of 38.
The painting on the left is by Otto Wols and sold for 5.71 million dollars. The painting on the right is by Jinx Davis and was painted on an old hodge-podge framed canvas and given away to a friend.
Art teaches us to live with mysteries. What value does art hold? How do we determine value? Do our images emerge collectively? How would an expert in art history critique the two paintings? Did I imitate without ever seeing a Wols painting? Do humans share a vast visual library of images? Ah…

Jinx Davis is an actress, artist, and entrepreneur. During the Covid pandemic, she created hundreds of paintings that she turned into printable art to help support the Living Arts Corporation.